Attalus, King of Pergamon, named the city “Atteleia”, founded Antalya in the 2nd century B.C. The city of Antalya stretches along the bay bearing its name, and is built at 39 meters altitude on a rocky c

Attalus, King of Pergamon, named the city “Atteleia”, founded Antalya in the 2nd century B.C. The city of Antalya stretches along the bay bearing its name, and is built at 39 meters altitude on a rocky c 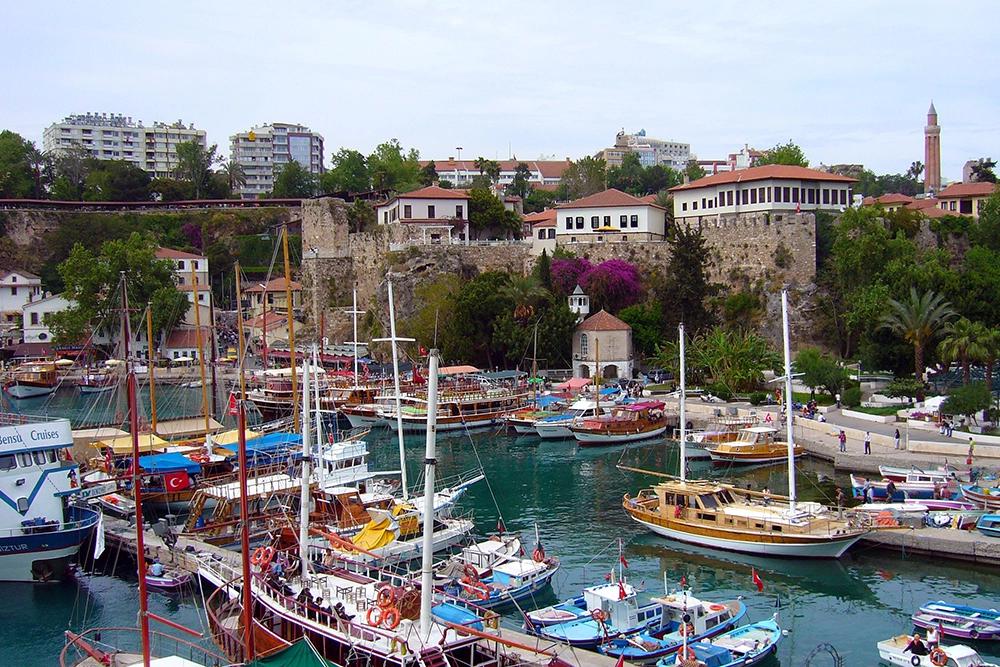 Attalus, King of Pergamon, named the city “Atteleia”, founded Antalya in the 2nd century B.C. The city of Antalya stretches along the bay bearing its name, and is built at 39 meters altitude on a rocky coastline. One is immediately struck by the Taurus Mountains rising to 3,756 meters above the coastline, interspersed with valleys of varying sizes. The taurus Mountains against the blue sky, the precipices and especially the caves close to the sea add another dimension to the beauty of the region. Small and large streams emerging from the west side of the Taurus water the plains on their journey to the Mediterranean. This translucent running water, cascading in to the sea at points along the cost, is another attractive sight. Every kind of tropical plant can be found along the coast. In Antalya the four seasons only appear on a calendar, as there is no real winter.The summers are hot and rainless while the other months are warm and often rainy. The average annual temperature in Antalya is 65 F. The average temperature in the summer months is about 95 F. The population of Antalya is about 1,500,000 and the average number of tourist annually that visit Antalya is 10,000,000 people. Antalya is the most visited city in Turkey.The harbor area is undoubtedly the most interesting part of the city. Although construction was begun at the time of the foundation of the city the surviving remains generally date back to the 3rd century AD with traces of Roman and Ottoman restorations work in the upper parts of the walls. The marina is surrounded by numerous bars, cafes, restaurants and tea-gardens, set on the top of the cliffs, high above the harbor, one can enjoy a marvelous bird’s eye view of the loveliest part of the old city.

DAY 1
Arrive in Antalya, and transfer to hotel & check in. You’ll relax in the hotel for a short period and then take a short city tour. Visit Antalya Archaeological Museum where Antalya's several thousand years of history is laid out before you in chronological order. Visit to Hadrianus Gate from the time of Roman Emperor Hadrian, Clock Tower, Republican Square, Palm Street, Old Town with Marina.

Antalya
Antalya Old City and Harbor
Antalya Old City and Harbor
Archeological Museum of Antalya
Archeological Museum of Antalya
Clock Tower
Hadrianus Gate
Palm Street
Republican Square
DAY 2
Depart in the morning and visit Perge. Next proceed to Aspendos, which bears one of the best preserved Roman theaters in Anatolia. Visit Side is one of the best-known classical sites in Turkey. The Temple of Apollo, which is situated near the sea, a fountain and Necropolis.

Ancient city of Perge
Necropolis (Hierapolis)
Side
Temple of Apollo
Theather of Aspendos
Theather of Aspendos
DAY 3
Depart Antalya for Demre to visit the best examples of Lycian tombs at Myra and the Church of St. Nicholas the Saint to whom is referred to as Santa Claus. After lunch, sail over turquoise waters to the picturesque Kekova Island. Discover the extraordinary underwater ruins of the sunken city of Simena. There are opportunities to swim and snorkel if desired. Return in the evening to Antalya.

Ancient city of Myra
Boat Trip around Kekova
Boat Trip around Kekova
Lycian tombs at Myra
St. Nicholas Church
St. Nicholas Church
Sunken city of Simena
Sunken city of Simena
DAY 4
Visit Duden waterfalls, 14 km northeast of Antalya, you can walk behind the rushing cascade for a thrilling experience. In the afternoon visit the ruins of the city of Termessos are perched on a 1050 meter high plateau, lying on the western slopes of Gulluk Montain northwest of Antalya.