About the tour in general Also known as "Anatolia", the beautiful land of Turkey has one million years of stunning historical, cultural, natural and biblical riches. Turkey' s history goes back to the beginning of civilization.

About the tour in general Also known as "Anatolia", the beautiful land of Turkey has one million years of stunning historical, cultural, natural and biblical riches. Turkey' s history goes back to the beginning of civilization. 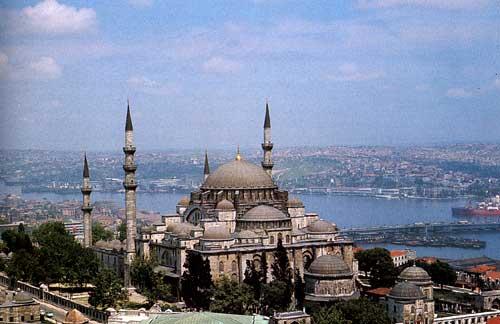 Also known as "Anatolia", the beautiful land of Turkey has one million years of stunning historical, cultural, natural and biblical riches. Turkey' s history goes back to the beginning of civilization.The earliest known inhabitants appeared at Catal Hoyuk, located in Central Anatolia, in 10,000 B.C. One of the first civilizations was known as the Hittites. When Noah made his magnificent journey during the great flood, he settled his ark in Mount Ararat (Ağrı), East Anatolia. When the Apostle Paul made his missionary journeys, he traveled through the Southeast, Mediterranean, Aegean and Marmara Regions of Turkey. Efes, biblically known as Ephesus, the most impressive archaeological site in Turkey, is where you can visit and tour inside the Virgin Mary's home. When St.John spoke of the Seven Churches in the Book of Revelation, he was speaking to the Church in Ephesus, Smyrna, Pergamos , Thyatira, Sardis, Philadelphia, and Laodicea all located in Turkey. Alexander The Great conquered the area until his death in 323 B. C., several small states appeared and the Roman Empire gained control of the whole region, and Christianity began to be dominant. Later, about the 11 the century AD, the Seljuk’s invaded the area, took control and Islam began to be the dominant religion. After Seljuk' s, the Ottoman Empire began to grow and gain power and became one of the biggest, and long lived Empires known. Ottoman Empire, established in 1299 had power over three continents, Eastern Europe, Western Asia and North Africa. They ruled from 1299,thru 1923 when the Ottoman was split up and defeated during the First World War. Turkish commander Mustafa Kemal Atatürk. In 1923 he founded today's modern Republic of Turkey. Today's Turkey is located between two continents, 97% on the Asian side and 3% on the European side. Turkey is surrounded by the Black Sea, Marmara Sea, Aegean Sea, and the Mediterranean. Today's Turkish people are very modern and education is very important. Through the ages, Turks are very friendly and always show their hospitality. They are eager to make visitors welcome. Caprinae Travel of Turkey recommends you to experience A World of Wonder, A World of Beauty. We want you to EXPLORE TURKEY & FEEL THE DIFFERENCE.

DAY 1
Arrive in Istanbul, and transfer to hotel & check in. You’ll relax in the hotel for a short period and then take a boat trip in the famous Bosphorus Strait (between the two continents). Have a welcome dinner in the evening.

Boat Trip on the Bosphorus Strait
Istanbul
Kumkapi Restaurants
DAY 2
Visit Topkapı Palace (where the Sultans of Ottoman Empire lived) and its historical surroundings such as the Hippodromme and Blue Mosque in the morning and Byzantium Basilica Cistern, Haghia Sophia Museum from Byzantines in the afternoon and return to hotel for overnight stay.

Grand Bazaar
Spice Market
Suleymaniye Mosque
DAY 4
Check out of the hotel and drive to West of Istanbul; Dardanel (Gallipoli) Area. Visit Anzac bay, Dardanels, monuments (tracks of 1st World war) and check in to the hotel for overnight.

Anzac Bay, Dardanels, Monuments (tracks of 1st World war)
Dardanel (Gallipoli) Area
The Dardanelles
DAY 5
Check out of the hotel and drive down to Aegean Coast. You’ll visit the ancient city of Troy and Assos ancient ruins and experience 4,000 years of history. Early evening, you will drive to Kusadasi and check into the hotel for overnight stay.

Aegean Coast
Ancient ruins of Troy
Kusadasi
DAY 6
Drive to Ephesus (one of biggest cities of ancient times with its 3000 years old history), visit the ancient city of Ephesus and Artemis Temple (one of the Seven wonders of the world). You will also visit the Ephesus Museum. Drive back to Guvercin Island and enjoy the sunset then return to the hotel for overnight stay.

Ancient city of Ephesus
Ancient city of Ephesus
Artemis Temple
Ephesus Museum
Pigeon Island / Guvercin Adasi
DAY 7
Check out of the hotel, visit the house of Virgin Mary and the St. John Church. You will head to Denizli for Pamukkale - Cotton castle and enjoy free time to explore the sights, natural cascades, pools and marvelous travertines. Check into the hotel.

Hierapolis / Pamukkale / Cotton Castle
House of Virgin Mary
St. John Church
DAY 8
Visit the ancient city of Hierapolis, the holy city which has one of the biggest necropolis in Asia minor. Drive to Antalya (Mediterranean coast of Turkey), check into the hotel for overnight stay.

Antalya
Necropolis (Hierapolis)
Ancient city of Hierapolis, Holy City
DAY 9
Drive to Kekova Island and take a boat trip around Kekova in the Mediterranean Sea. Visit St. Nicholas Church and Myra, an ancient city. Drive back to the hotel for the night.

Ancient city of Perge
Theather of Aspendos
Theather of Aspendos
DAY 11
Visit Antalya museum and Old city and harbor and then take a short boat trip in the afternoon and see the Duden waterfall cascading down into the Mediterranean Sea, then return to the hotel for overnight stay.

Antalya
Antalya Old City and Harbor
Antalya Old City and Harbor
Archeological Museum of Antalya
Archeological Museum of Antalya
Duden Waterfall
Duden Waterfall
DAY 12
Check out of the hotel in the morning and drive to Konya. You will visit Mevlana Museum to learn about mystical religious dance known as "Whirling Dervishes" who use music and dance to induce themselves into a mystical state. You will also visit ancient caravanserai–Sultanhani. Continue to Cappadocia and check into the hotel for overnight.

Avanos
Dervent / Fairytale Chimneys
Göreme Open Air Museum
Uchisar Rock Castle
Zelve Open Air Museum
DAY 14
Visit Derinkuyu an underground ancient city (where 2nd-3th century Christian inhabitants built up tunnels into the soft volcanic rock of hills. Than continue on to Ihlara Valley" and a short walk in the valley. Have lunch. Drive to "Kayseri" for Turkish Airlines flight to Istanbul (50min) and transfer to hotel in Istanbul for check in and overnight stay.

Ihlara Valley
Underground ancient city of Derinkuyu
DAY 15
Check out of the hotel and depart to airport for your return home.